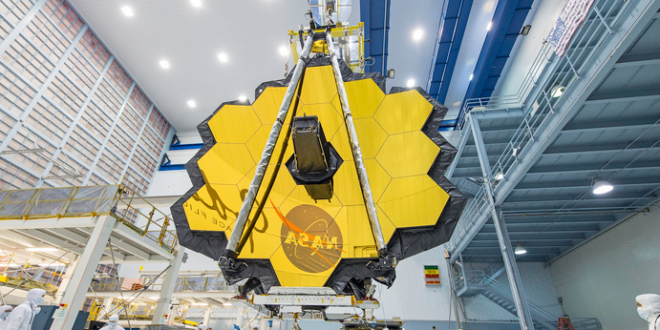 NASA’s revolutionary James Webb Space Telescope is finally in space. The Webb, charged with seeing deeper into the universe than any telescope ever built, blasted off right on time at 7:20 a.m. Saturday from the European Space Agency’s spaceport in Kourou, French Guiana, on South America’s northeast coast.

At launch, the $10 billion telescope, NASA’s long-delayed successor to the Hubble Space Telescope, was folded up upon itself and fully enveloped, unseen, in the cone of Arianespace’s heavy-lift Ariane 5 rocket, which rolled to the launchpad Thursday.

The massive telescope is designed to capture infrared light, especially from galaxies so far away that their light has been traveling through space for almost the entire history of the universe.

“We are expecting to see the light from the first galaxies that formed some 100 [million], 200 million years after the Big Bang,” NASA administrator Bill Nelson said in a pre-launch briefing.

“It will deliver world-class science. It’s a revolutionary technology that will study every phase of 13-and-a-half billion years of cosmic history.”

We have LIFTOFF of the @NASAWebb Space Telescope!

At 7:20am ET (12:20 UTC), the beginning of a new, exciting decade of science climbed to the sky. Webb’s mission to #UnfoldTheUniverse will change our understanding of space as we know it. pic.twitter.com/Al8Wi5c0K6

#NASAWebb’s fairing has been jettisoned, revealing the telescope for the first time in space! Also, we have successfully received telemetry from the observatory. #UnfoldTheUniverse https://t.co/uLUmjnfOO4 pic.twitter.com/MN3xOPounA

Here it is: humanity’s final look at @NASAWebb as it heads into deep space to answer our biggest questions. Alone in the vastness of space, Webb will soon begin an approximately two-week process to deploy its antennas, mirrors, and sunshield. #UnfoldTheUniverse pic.twitter.com/DErMXJhNQd

Previous CHATTER AWAY: Overnight Open Thread
Next 62% Of Unvaxxed Say They Will Never Get The Shot