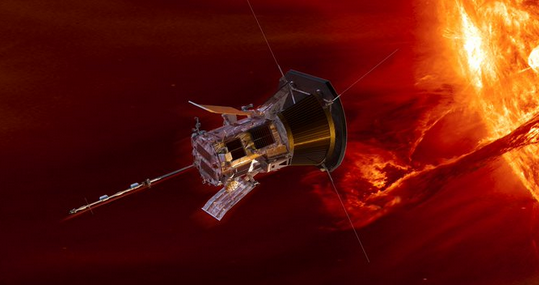 Via press release from NASA:

For the first time in history, a spacecraft has touched the Sun. NASA’s Parker Solar Probe has now flown through the Sun’s upper atmosphere – the corona – and sampled particles and magnetic fields there.

The new milestone marks one major step for Parker Solar Probe and one giant leap for solar science. Just as landing on the Moon allowed scientists to understand how it was formed, touching the very stuff the Sun is made of will help scientists uncover critical information about our closest star and its influence on the solar system.

“Parker Solar Probe “touching the Sun” is a monumental moment for solar science and a truly remarkable feat,” said Thomas Zurbuchen, the associate administrator for the Science Mission Directorate at NASA Headquarters in Washington.

The Parker Solar Probe actually flew through the corona in April during the spacecraft’s eighth close approach to the sun. Scientists said it took a few months to get the data back and then several more months to confirm. “Fascinatingly exciting,” said project scientist Nour Raouafi of Johns Hopkins University.

Launched in 2018, Parker was 8 million miles (13 million kilometers) from the center of the sun when it first crossed the jagged, uneven boundary between the solar atmosphere and outgoing solar wind. The spacecraft dipped in and out of the corona at least three times, each a smooth transition, according to scientists.

Announced today at #AGU21, NASA’s Parker Solar Probe has officially become the first spacecraft to fly through the Sun’s outer atmosphere, or corona.