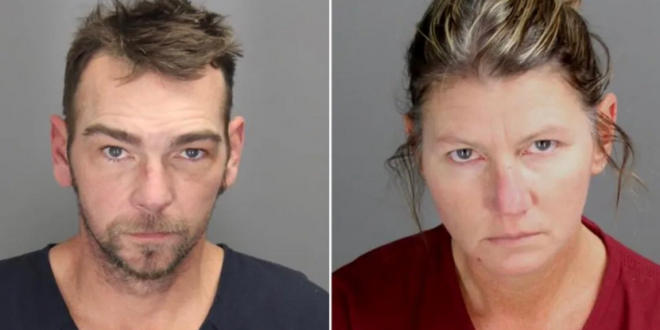 The parents of a teen accused of carrying out a mass shooting at Oxford High School became wanted fugitives Friday when police couldn’t find them to bring them in to face involuntary manslaughter charges. James and Jennifer Crumbley were finally were arrested early Saturday morning in Detroit.

Police said a business owner called 911 to report the suspects’ vehicle — a black 2021 Kia Seltos SUV with the Michigan license plate number DQG 5203 — in his parking lot on Bellevue Street near Jefferson Avenue. Jennifer Crumbley was spotted near the vehicle by the business owner, police said.

Police said she fled the area on foot after the 911 call was made. The arrest was announced just before 2 a.m. Saturday. Police said the couple was found and apprehended in the basement of a building on Bellevue Street.

The fugitive parents of a 15-year-old boy accused of fatally shooting four classmates at a Michigan high school were taken into custody overnight, after they were found hiding in a commercial building in Detroit, police said in a news conference early Saturday.

Jennifer and James Crumbley were located after a tip from the local community, and were taken into custody unarmed and “without incident,” Detroit police chief James White said. The pair “did not break in” to the building, but “were aided,” White said, adding that police were investigating one other person that may have assisted the couple.

When asked about the pair’s emotional state as they were taken into custody, White said they were “very distressed” and that one of them left the scene with their head bowed.

The parents of the Oxford High School shooter, James and Jennifer Crumbley, now charged with four counts each of involuntary manslaughter. They appeared at their son’s arraignment in hoodies and caps on Zoom. For their next arraignment, they’ll be in orange jumpsuits. pic.twitter.com/gTy5oUr8MP

MANHUNT OVER: James and Jennifer Crumbley, the parents of the Michigan teen charged in the Oxford High School shooting, were located and arrested in #Detroit after a citizen saw their vehicle in a commercial building. The couple faces involuntary manslaughter charges. @CBS46 pic.twitter.com/OlTTNzseX1

We continue to extend our deepest condolences to the the community of Oxford. 🙏 #OneDetroit pic.twitter.com/QAoiolvlFf

Right now, police are circling the car that the Crumbleys were in. It was found near an art studio on Detroit’s Eastside. Police said someone they knew allowed them in. @clickondetroit @Local4News #crumbleyparents pic.twitter.com/MY8tZSm8fC

Previous CHATTER AWAY: Overnight Open Thread
Next Koch Leader Was Forced Out Over Alleged Adultery