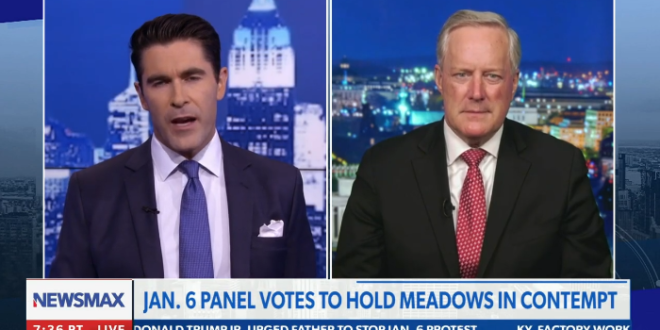 Meadows: Riot Panel Is Trying To “Weaponize” My Texts

Newsmax host Rob Schmitt asked Meadows about the messages from Hannity, Don Jr., Brian Kilmeade and Laura Ingraham which implored the chief of staff to get former President Donald Trump to act and get control of his supporters during the attack on the Capitol.

“We’ve tried very hard, in a very transparent and accommodating way, to share non privileged information,” Meadows said. “And what we found out tonight is that not only did that just get disregarded, but then they tried to weaponize text messages, selectively leaked them, to put out a narrative that the president didn’t act.”

Meadows appeared on Sean Hannity’s show last night, but didn’t talk about the texts at all… Not even the one from Hannity himself. Meadows did, however, mention the texts on Newsmax. pic.twitter.com/57vcnRs3Fg