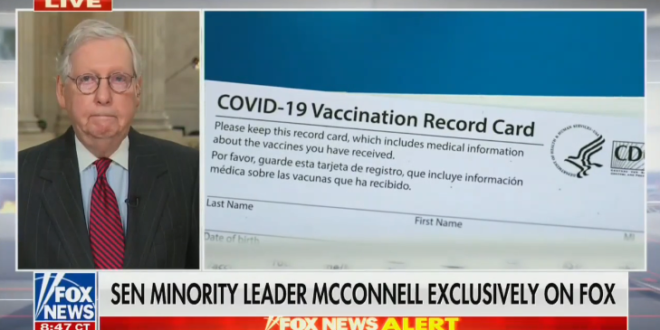 “Multiple courts have pushed the pause button on these government vaccine mandates. There is a decent chance the courts will strike them down.

“Secondly, next week we are going to have a vote on the vaccine mandate prohibiting that regulation from going into effect.

“I think it has a decent chance of passing the Senate.I don’t think shutting down the government over this issue is going to get an outcome.

“It would only create chaos and uncertainty. So I don’t think that’s the best vehicle to get this job done. I think the courts are likely to get it done or we’ll pass early next week – freestanding – a measure to overturn the government mandate.

“A shutdown makes no sense for anyone.” – Senate Minority Leader Mitch McConnell, this afternoon on Fox News.

JUST NOW: @POTUS says he spoke with Schumer and McConnell and there will not be a government shutdown “unless somebody decides to be totally erratic.”

Asked Senate Minority Leader Mitch McConnell if he’s still confident there won’t be a shutdown, and he told me: “Yes. We’re not going to do that.”

“In what world can Republicans look at the American people with a straight face and claim to fight for them if they vote to fund the government tyrannically forcing them to get the jab or lose their job?”#DefundVaxMandates#DefundTheMandateshttps://t.co/hQCsrN37a6