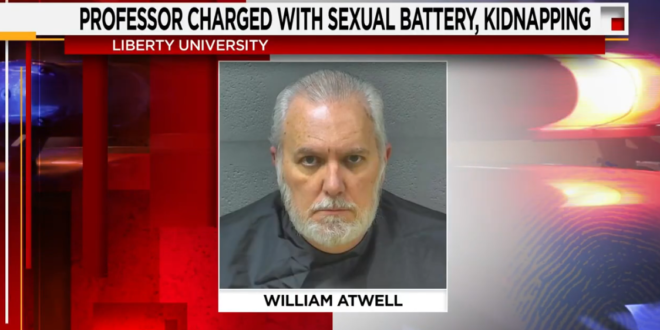 A professor at Liberty University has been arrested on suspicion of sexual battery and abduction. Online records show William Atwell, who is listed on Liberty University’s website as an associate professor of American Sign Language, has been charged in Lynchburg General District Court.

According to online records, Atwell was arrested by Liberty University police on November 20 and charged with sexual battery and abduction by force or intimidation related to an incident on Sept. 15, 2021.

Atwell was released from the Lynchburg Adult Detention Center on Monday after posting a $3,000 bond. He is set to appear in court on Jan 25, 2022. Atwell’s arrest comes as Liberty University faces several lawsuits alleging the university punished women who reported being sexually assaulted on campus.

Read the full article. Details of the alleged incident and the identity of the student have not been disclosed.