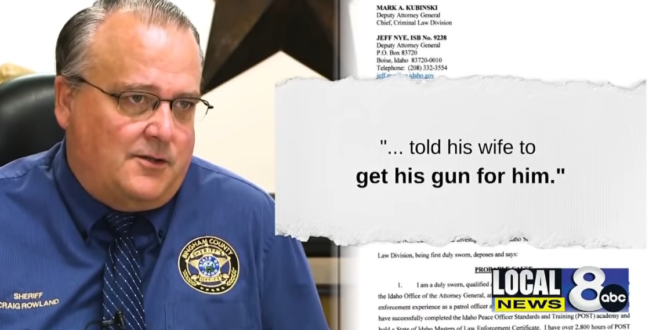 Bingham County Sheriff Craig Rowland appeared in court Wednesday morning on aggravated assault and battery charges. Wednesday’s hearing in front of Judge Faren Eddins was about the conditions of release.

The state asked that Rowland’s weapons be surrendered to the Idaho State Police, no contact orders be granted for three minor victims, and for the judge to require Rowland to take a prolonged leave of absence from work.

The charges stem from an incident in which he allegedly pointed a gun at his neighbor, Chelsea Cox, who was with a church group of girls when delivering Thanksgiving cards to his home and said “I will f—ing shoot you.”

An affidavit of probable cause says Rowland stopped the vehicle that held the youth group. He allegedly drew a pistol, pulled a woman through the window of the vehicle and threatened her with his gun to her head. Calls for Rowland’s resignation have since come from numerous public officials and law enforcement officers.

According to Deputy Attorney General Jeff Nye, the prosecution plans to call on eight eyewitnesses — all of whom provided accounts of the incident that were consistent with each other and corroborated by statements provided by Rowland. The prosecution will also present a video.

Sheriff Craig Rowland is being charged for pulling a gun on 7 girls & threatening their church group leader for handing out “thankful turkeys” notes at his door. He then tried to JUSTIFY his actions by making accusations against his indigenous neighbors! https://t.co/CfmLwBc2Cn

Local officials are calling on Bingham County Sheriff Craig Rowland to resign after he allegedly aimed a pistol at members of a church youth group and pulled their leader out of a car by her hair. https://t.co/ksmKQ6d9A6