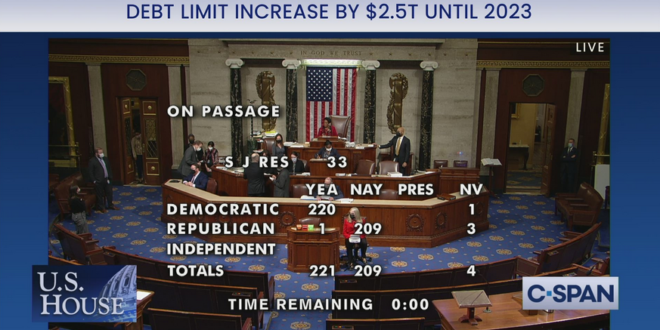 The resolution introduced in the Senate on Tuesday to raise the debt limit by $2.5 trillion passed along party lines, 50 to 49. Senate Majority Leader Charles Schumer said this would mean Congress won’t have to fight about raising the debt limit again until 2023 — beyond the midterm elections.

The legislation headed to the House of Representatives for a vote, which took it up after midnight Wednesday after voting to hold former Trump chief of staff Mark Meadows in contempt of Congress. The final vote tally was 221-209, with one Republican voting with all the Democrats.

U.S. House votes 221-209 to raise the federal debt limit by $2.5T, sending the bill to President Biden for his signature; the measure would avoid a default and prevent another clash over the debt ceiling until after next year’s midterm elections. https://t.co/km8eVTlxyT

House passed legislation to lift the debt ceiling limit by $2.5T until 2023

The vote was 221-209 with 1 GOP — Rep. Adam Kinzinger joining all Dems in voting for the measure

It heads to President Biden desk who is expected to sign it before Treasury Dept defaults on US $29T debt pic.twitter.com/glHVumiCbC