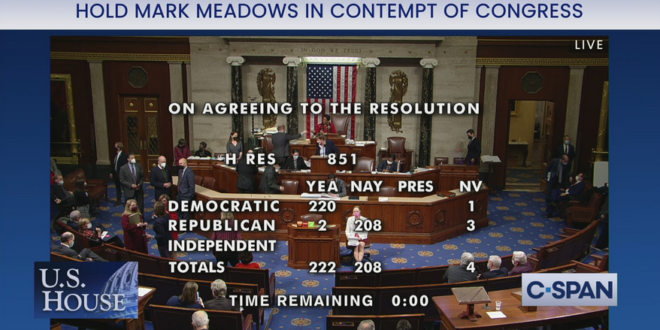 The House voted Tuesday night to hold former White House chief of staff Mark Meadows in contempt for defying a subpoena from the committee investigating the Jan. 6 Capitol insurrection. The House voted 222-208 on the measure, which also urged the Justice Department to prosecute Meadows criminally for contempt.

George Terwilliger, a lawyer for Meadows, said in a statement Tuesday the former chief of staff never stopped cooperating with the committee. Terwilliger argued that Meadows cannot be compelled to appear for questioning because of Trump’s claim of executive privilege.

The referral now heads to the Justice Department.

222-208, the House refers Mark Meadows — a former member of the body and White House chief of staff — to DOJ to be held in criminal contempt for defying Jan. 6 subpoena. Just two Republicans voted for it: Adam Kinzinger and Liz Cheney. (Nine Rs voted to hold Bannon in contempt)

Here is the moment when history was made and Mark Meadows was referred to the DOJ for criminal prosecution 222-208. pic.twitter.com/k7dPHeWXpW