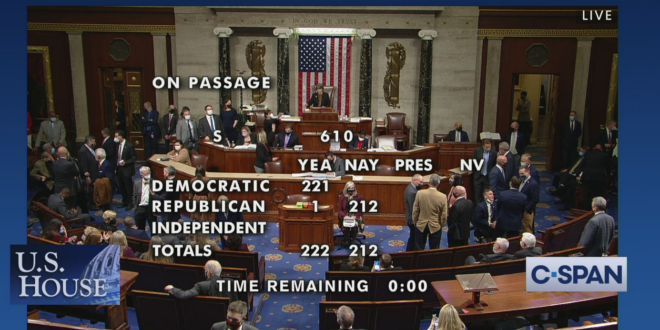 The House approved legislation on Tuesday that would pave the way for a swift increase in the debt ceiling amid a Republican blockade, after congressional leaders in both parties agreed to try an unusual maneuver that could avert the threat of a first-ever federal default.

The 222-to-212 vote came after days of quiet bipartisan talks to resolve the stalemate culminated in a deal. Only one House Republican, Representative Adam Kinzinger of Illinois, joined Democrats in voting in favor of the measure, demanding that the party in charge of both congressional chambers and the White House address the government’s ability to borrow.

Its passage was not guaranteed in the evenly divided Senate, where Republicans have for weeks refused to let Democrats take up any bill to provide a long-term increase.

TRUMP: “Old Crow Mitch McConnell, who is getting beaten on every front by the Radical Left Democrats… must be fully prepared to use the debt ceiling in order to totally kill the Democrats’ new social spending (wasting!) bill.” https://t.co/VktfX4kW1B

Boebert is fuming at Republican Senators tonight: “The swamp creatures are working together to raise the freakin debt ceiling! This is totally corrupt and screws the American people right in their faces! .. These fake Republicans .. backstab the voters.” pic.twitter.com/98zMbNZabQ

@laurenboebert The tall red one, is the debit the Dems had to raise the ceiling for. TRUMPS DEBT. Your G.E.D. is showing. pic.twitter.com/K94zCWGOj0