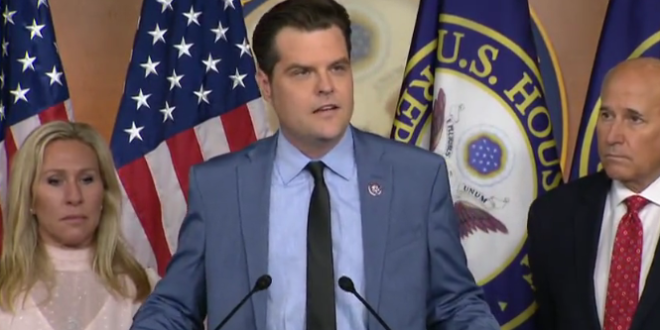 Rep. Matt Gaetz (R-Fla.) on Tuesday envisioned an extremist Republican takeover of House oversight in a speech that critics slammed as “terrifying.”

“We are going to take power after this next election and when we do, it’s not going to be the days of Paul Ryan and Trey Gowdy and no real oversight and no real subpoenas,” Gaetz told a press conference highlighting conditions that alleged U.S. Capitol rioters are enduring at the District of Columbia jail.

“It’s going to be the days of Jim Jordan and Marjorie Taylor Greene and Dr. Gosar and myself doing everything” to get answers to (debunked) claims about FBI involvement in the deadly violence on Jan. 6, he added.

Matt Gaetz says he wants Trump to become Speaker of the House if Republican win the majority back in 2022.

Gaetz said he has talked to Trump about it.

Republicans have just turned every House race into a referendum on Trump. pic.twitter.com/ZS0KDjXwWz

Why hasn’t Matt Gaetz been indicted?

Do our FBI and DOJ indict Republicans for *anything*?

Where the fuck are the alleged investigative and prosecutorial divisions of the federal government? https://t.co/zuHEyTWH0n

Well of course Gaetz says that. You need all the friends you can get when the FBI is investigating you for child sex offenses. https://t.co/eW0ng9jOhA

If we lose in November, Marjorie Taylor Greene, Matt Gaetz and the rest of the January 6th caucus will be in charge.

Don’t believe me? Listen to it, straight from the horse’s mouth ⬇️ https://t.co/uHEnb7Z2JZ