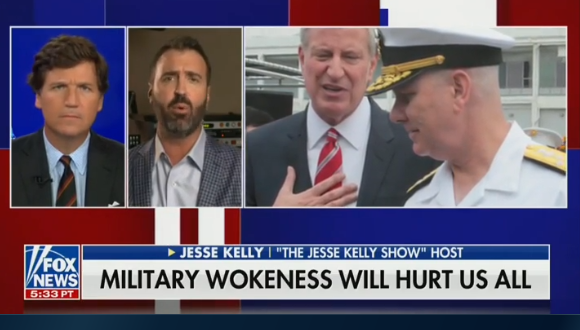 “Well, what we’re watching is the destruction of the U.S. military. And what we’re gonna end up seeing, Tucker, is thousands, tens of thousands, maybe hundreds thousands of Americans die.

“Those are the stakes of the game we’re playing here. We don’t need a military that’s woman-friendly.

“We don’t need a military that’s gay-friendly, with all due respect to the Air Force.

“We can’t even get women off of naval vessels. That should be step one, but most of them are already pregnant anyway.” – Fox News guest Jesse Kelly.

PREVIOUSLY ON JMG: Jesse Kelly says having an LGBT-friendly military will bring about the next Hitler or Stalin. Jesse Kelly declares that Democrats are forcing the GOP to “elect a fascist.” Twitter removes Jesse Kelly’s 2020 election day post suggesting that America might need Kenosha killer Kyle Rittenhouse that night.