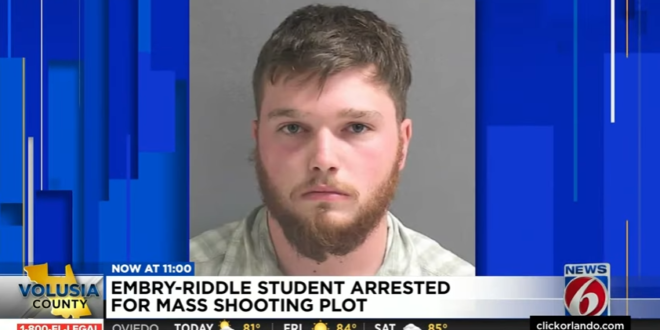 Daytona Beach Police Chief Jakari Young said police were able to stop a potential mass shooting at Embry-Riddle Aeronautical University on Thursday. Police arrested John Hagins, 19, Thursday morning outside of his home at Andros Isles Apartments, which is about three and a half miles from the university.

Hagins now faces charges of written threats to injure or kill, terrorism and attempted first-degree homicide. Police identified the rifle as a Kel Tec SUB2000. The chief also showed that there were several rounds of 9mm ammunition inside the backpack, along with six magazines.

Police say he confessed to making threats to shoot up the campus Thursday which was the last day of classes before winter break. “He said once done at the firing range, he was going to campus to enact a Columbine,” Daytona Beach police Chief Jakari Young said about Hagins.

The chief said thankfully two fellow students came forward and alerted the university after hearing about the alleged plan on social media. “By the grace of God, they came forward and prevented Embry-Riddle Aeronautical from being the next national media story with regards to a mass shooting,” Chief Young said.

We have arrested an @EmbryRiddle student for plotting to shoot up the campus on the final day at the school before winter break.https://t.co/HAlDnbRl9q