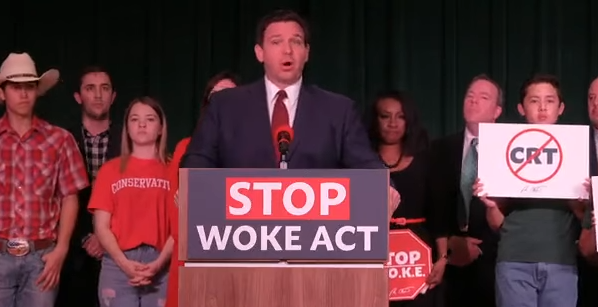 DeSantis announced the Stop the Wrongs to Our Kids and Employees (W.O.K.E.) Act, which he said in a statement would be “the strongest legislation of its kind in the nation and will take on both corporate wokeness and Critical Race Theory.”

The law, which was also rolled out at a campaign-style press conference, allows parents to sue over the teaching of the theory. However, CRT is a graduate-level theory taught at the university level more often than in K-12 schools.

DeSantis introduced the “Stop W.O.K.E. Act” during a rally-style event in Central Florida. DeSantis said the legislation would put into law the Florida Department of Education’s prohibition on “critical race theory” in K through 12 schools.
https://t.co/jdgGm6qPcZ