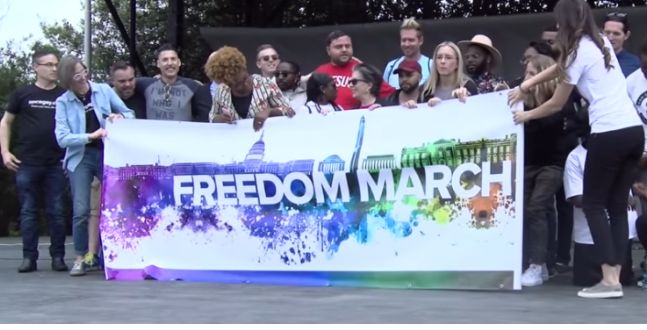 “Ex-Gay” Leader: I Keep Hooking Up With All These Men But Then I Repent, Jesus Always Forgives Me [VIDEO]

Jeffrey McCall, the founder of “ex-gay” group Freedom March, has confessed to having multiple hookups with men since last year.

McCall claims to have lived as a gay male sex worker, and then as a transgender woman named Scarlett, before renouncing his sexuality and gender identity and founding Freedom March.

But in a post last month on his Facebook page, McCall told his supporters that he had engaged in “multiple” sexual encounters with men since 2020.

In 2020 I met someone that I was trying to help (I was helping in other ways he didn’t deal with SSA) which lead to me being unfaithful to Jesus and giving my heart away.

After denying what I wanted with him I then went on to fall sexually with a man when I felt wounded and lonely. This lead to multiple falls with men over time. (None of these men were Christians or people from ministry)

Everytime I fell I would truly repent and turn away again. I would feel Gods love, mercy, and forgiveness sometimes before I could even finish the prayer. (I am not condoning this sin at all I’m just sharing what happened when I fell).

Everytime I fell the Lord reminded my heart that it was all about love. That he was in this together with me and he would walk me through sanctification.

My previous reports on this group are here. McCall was recently featured in the ex-gay Netflix documentary “Pray Away” and his appearance in the film resulted in adulatory posts on Christian sites.

An “ex-gay” activist who tells people they can “pray away the gay” has admitted to having sex with multiple men in the last year. https://t.co/GArHg8VXko