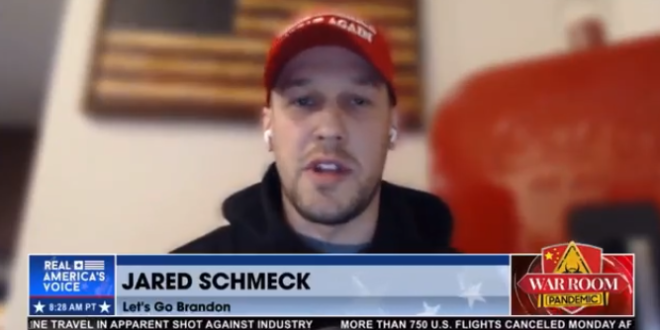 First, a reminder about this lying douchecanoe:

A Central Point father of four who wished President Joe Biden and the first lady a wonderful Christmas and added “Let’s go, Brandon,” at the end of a live streamed Santa tracker call told The Oregonian/OregonLive that he didn’t intend his parting message to be vulgar.

“At the end of the day, I have nothing against Mr. Biden, but I am frustrated because I think he can be doing a better job,” said Jared Schmeck, 35, who works for an electric company and was previously a Medford police officer for six years until he resigned in July 2018. “I mean no disrespect to him.”

Schmeck said he’s not a “Trumper,” but described himself as “free-thinking American and follower of Jesus Christ.” Schmeck said he and his family call into the NORAD Santa tracker every Christmas Eve. He said he wasn’t aware the call would be livestreamed.

That was yesterday. Today he went on Steve Bannon’s show to rant about all the usual things that “Trumpers” do.

Jared Schmeck tells Steve Bannon: “Donald Trump is my president and he should still be president right now. The election was 100% stolen. So, I just want to make that clear.” pic.twitter.com/YbyysPAIbH

#JaredSchmeck is a former police officer who now works for his family’s electric company, Winema Electric Inc., which took 440K in PPE loans after Joe Biden worked to undo the damage Trump did to America. This is what republiKLANs are:https://t.co/n0anwIjUaR pic.twitter.com/S7EacX4BL9

Jared Schmeck with a shining example conservative Christian values: hypocrisy and persecution complex. When he’s an ass, that’s his Free Speech. When everyone else uses their Free Speech, it’s an attack.#FJSchmeck #JaredSchmuck pic.twitter.com/HlcT3hvI0B

Weary reminder that the 1st Amendment speaks only to the right of otherwise of Congress to pass laws abridging “free speech”, and NOT to whether the people are entitled to call a dick a dick for being a dick. We are, and Jared Schmeck is, in fact, a dick.

Jared Schmeck embodies the MAGA conservative: a pillow-soft fake tough guy who thinks he’s owning the libs by insulting Joe Biden in code, and whines about his free speech being oppressed when he gets pushback. Looking forward to his new podcast. https://t.co/TlUeMVlGaz

No Jared Schmeck, you’re being criticized for being rude and disrespectful-in a childish way-to our president. He was speaking to your children-wishing them well, asking what they wanted from Santa.
You’re free to say what you want. But free speech comes with responsibility, too https://t.co/lBtepoFFVA