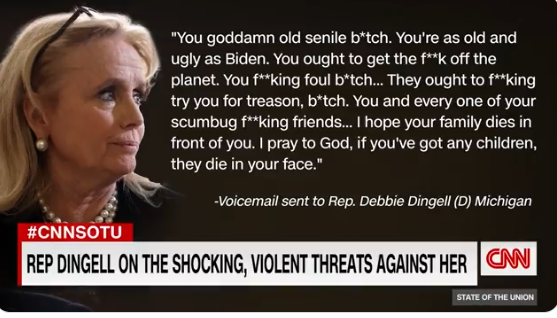 With CNN host Dana Bash warning the audience about what was to follow, her producers play the audio where an unidentified man called the member of Congress a multitude of obscene names before stating, “I hope your family dies in front of you. I pray to God, if you got any children, they die in your face.”

As for comment afterward by host Bash, Rep. Debbie Dingell (D-MI) sat in silence for a moment before explaining the recording was one of many threats she has received since being singled out by the former president. “I’ve been getting those for a couple of years ever since the Christmas right after [husband] John had died,” she recalled.

“I’ve never seen anything like this before,” Upton said. https://t.co/xVqajkrudK #CNNSOTU pic.twitter.com/l7kX9ej1IW

Previous Anti-Vax QAnon Podcaster On Ventilator For Something
Next AP: Holiday Sales Rose At Fastest Pace In 17 Years