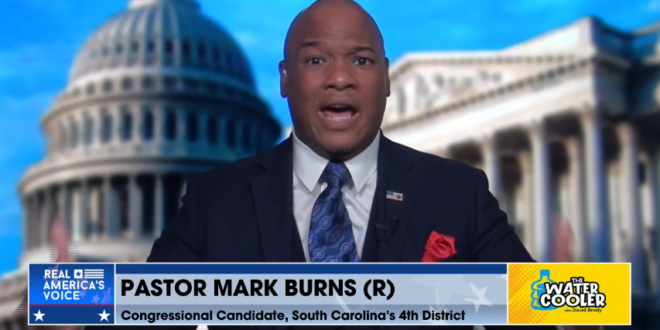 Cultist GOP House Candidate Doubles-Down: Every Law That’s “Against The Word Of God” Must Be Overturned

“Laws that are contrary to God’s word that are actively legal or laws today need to be overturned.

“Any law that is against the word of God, that is clearly against what God has said in his word – in a nation that is a Christian nation, a nation that has the majority of citizens who actively believe that Jesus is the Messiah, that he is coming back again with omnipotent power in his hands – if it’s against the word of God and it’s actively a law today, then it should be overturned.

“We should have a moral compass, and right now in America, we’re losing that moral compass.” – US House candidate and Christian nationalist Mark Burns, doubling-down on similar comments he made last month.

On his campaign website, Burns rages against LGBTQ rights and abortion. As you may recall, in 2016 Burns literally jumped out of his chair and fled a CNN interview after he was busted for lying about his military service and for lying about having a college degree. Burns later claimed he was “attacked” by CNN because he’s a black Trump supporter.

Previous Christian Site: “Be Leery” Of Muslim Candidate Dr. Oz
Next Megyn Kelly Rants Against “Dem Virtue Signaling” Face Masks: “I Feel I Have Joe Biden’s Hand Over My Mouth”