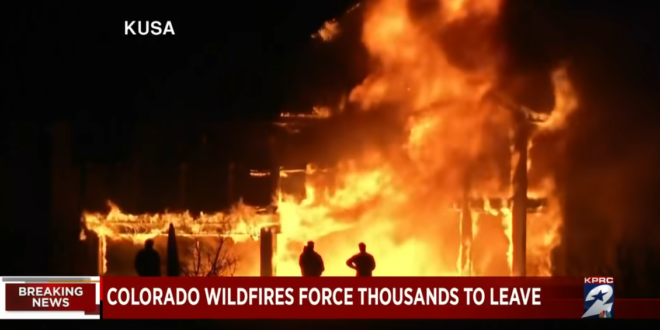 A wind-whipped grassfire roared east from Boulder Thursday afternoon, destroying at least 500 homes, closing major highways and causing the evacuation of more than 30,000 people in two towns, including hospital patients.

The Marshall fire, which officials said likely was sparked by downed power lines in the winds that reached gusts of more than 100 mph, grew to 1,600 acres by 5 p.m., Boulder County Sheriff Joe Pelle said in an evening news conference.

“The end won’t come until the wind subsides,” Pelle said. “This is the kind of fire you can’t fight head on.” More than 200 structures may have been lost to the flames in downtown Superior, including a hotel, he said. More than 300 homes were on fire in a single neighborhood.

Gov. Jared Polis declared a state of emergency, allowing the state to tap emergency funds and to deploy state resources, including the Colorado National Guard. He said wind gusts of up to 110 miles per hour had pushed the fires with astonishing speed across suburban subdivisions.

“This fire is, frankly, a force of nature,” Mr. Polis said at a news conference on Thursday. “For those who have lost everything that they’ve had, know that we will be there for you to help rebuild your lives.”

The fires started on Thursday morning, officials said, and more than 1,600 acres had burned by the evening. The specific cause was unclear as of early Friday morning. Avista Adventist Hospital, a 114-bed hospital in Louisville, said on Thursday that it had evacuated its intensive care units and its emergency department, moving patients to two other hospitals.