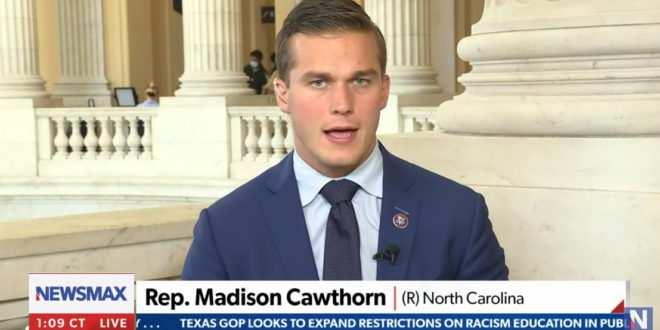 Cawthorn: “Dark Times” Are Coming And “Patriotic Americans” Will Be Victorious If It Comes To Civil War

“We, patriotic Americans, were born for such a time as this. We’re going to face some dark times as a nation. I genuinely believe that.

“I think we have an opportunity in the next four to six years to prevent kinetic force — countryman on countryman — from ever meeting.

“Although I have no doubt we would be victorious if that would ever happen.

“But remember, that would be so immoral and wrong if we said, ‘Hey, you know what? Let’s just kick off a civil war,’ and then we’ll just go ahead and go to that point.

“It’s time for us to stop being sheep and to stand up and be lions! The radical left should be terrified of who we are.

“The radical left should be terrified of what we are going to do.” – Christian nationalist GOP Rep. Madison Cawthorn, speaking today at the Turning Point USA conference.