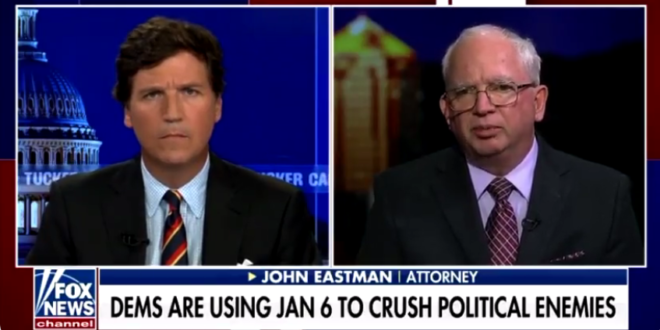 “Why comply?” asked Tucker Carlson. “I mean, honestly, at this point, look, if it’s totally fake. This is just some Soviet show trial, which it is, why would the rest of us have any kind of obligation to play along with it, honestly?”

“Well, we shouldn’t but Congress has the power to issue criminal contempt,” responded Eastman.

“Normally, those don’t go anywhere and such charades as this. But the Department of Justice is fully in line. And, you know, they’ve already brought one criminal indictment against one of the people that refused to comply.”

Last week Eastman said that he will plead the fifth.

Former Trump Lawyer Who Claimed Congress Didn’t Have to Certify Biden’s Win Says He Has to Abide By Subpoena From Congresshttps://t.co/D1qm7XUlvS

Tucker: So why comply?
Eastman: We shouldn’t but Congress has the power to issue criminal contempt.. the DOJ is fully inline. They’ve already brought one criminal indictment against one of the people who refused to comply… pic.twitter.com/vh7XJAi8Vr

Eastman seems a bit shaky about his records being subpoenaed. pic.twitter.com/bxquyMavWz

Tucker says Cleta Mitchell was just informed by her provider that the committee wants several months of her phone records and claims the provider “effectively” says they are going comply pic.twitter.com/dBLK5RyTUz

Tucker says Eastman’s provider notified him that unless he gets a court order, they are going to turn over his text messages to the committee pic.twitter.com/5jHpwnZOqu

Previous CHATTER AWAY: Overnight Open Thread
Next BOOK: Trump’s COVID Was Worse Than Was Claimed