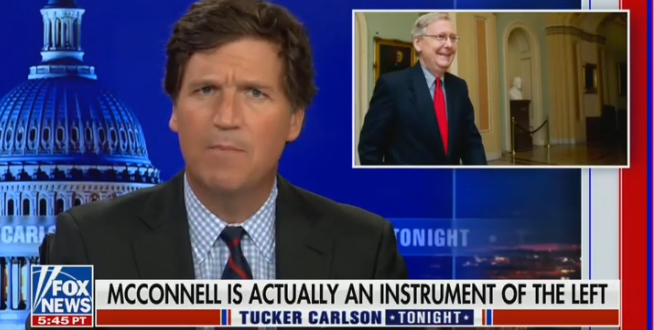 “McConnell knew that Tim Unes had helped organize Donald Trump’s political rally in Washington this January. There was nothing illegal or immoral about that. If anything it’s a constitutionally protected behavior, it is organizing a political rally. It is why we have the Bill of Rights.

“But the partisan lunatics on the January 6th committee don’t acknowledge the Bill of Rights and they objected to this and Mitch McConnell aggressively took their side as he has from the very beginning. So, McConnell then convinced the Dole family to cancel Tim Unes’ contract and disinvite him from the funeral.

“Then McConnell made sure the story made the New York Times and when he did that he knew perfectly well that a piece like this would completely destroy Tim Unes’ life, which unfortunately it definitely will.

“Even by Mitch McConnell’s usual standards of viciousness, and he is known as the nastiest old woman in town, this was an incredibly cruel thing to do.” – Tucker Carlson, last night.

Tucker Carlson calls Mitch McConnell an “instrument of the left” who’s known as “the nastiest old woman in town”. pic.twitter.com/gp4eQYJd05

Technically, Mitch McConnell is the Republican leader in the United States Senate.

But in real life, on the issues that matter, Mitch McConnell is an instrument of the left. pic.twitter.com/EUw8H3OUBT

The Elizabeth Dole Foundation confirms it has cut ties with event organizer Tim Unes who was working on late Senate Majority Leader Bob Dole’s funeral arrangements because of Unes’ alleged role in helping to organize the January 6 “Stop the Steal” rally https://t.co/GDj09ur9xV

The Elizabeth Dole Foundation has cut ties with Tim Unes, an event planner working on former Senator Bob Dole’s funeral, after it came to light that he had been subpoenaed by the committee investigating the Jan. 6 Capitol riot. https://t.co/PVTEQysgkL