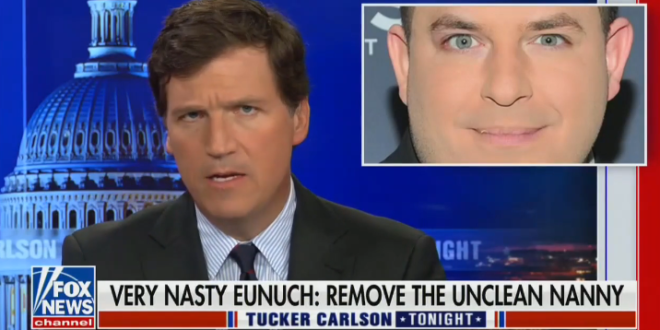 “The headline here is that CNN’s media critic dismissed – blithely dismissed – his little non-white servant because she didn’t obey and that was quote ‘very, very sad.’

“Well, how sad? How sad was he, exactly? Did he pay for health insurance until she finds a new job? What is she going to eat and how will she pay her rent now that she’s been dismissed by CNN’s ‘very sad’ media critic?

“We really don’t care what happens to our servants, do we, when they disobey? So we asked CNN today. Of course, we got no answer at all, which was in itself an answer, which is ‘We don’t know. We don’t care.’ Tells you a lot.” – Tucker Carlson, on last night’s show.

As CNN host Brian Stelter explains in the clip played by Carlson, his two children are too young to get vaccinated, his wife is immuno-compromised, and they gave the nanny six months to get vaccinated.

Carlson also appears to have invented the race of the nanny, as Stelter makes no mention of it.

The entire purpose of the segment, rather obviously, is revenge against Stelter for criticizing Fox News.

And as a bonus, Fox’s chyron operator got to call Stelter a “dwarf eunuch.” Watch the clip.

Tucker Carlson reveals audio of CNN’s Brian Stelter saying that he and his wife fired their nanny for refusing to get the covid vaccine pic.twitter.com/WPqNuf5Ysc