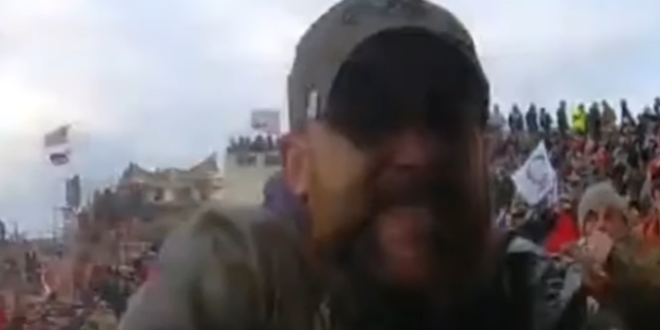 Capitol Rioter Collared Thanks To “Fuck You” Tattoo

The FBI has arrested a Donald Trump supporter from Michigan who was captured on video attacking law enforcement officers at the U.S. Capitol on Jan. 6 and whose identity was confirmed with the help of a “FUCK YOU” tattoo on the middle finger of his left hand.

Justin Jersey of Michigan ― who was No. 106 on the FBI’s Capitol wanted page and known to online “Sedition Hunters” as #Fingerman ― was charged by indictment for his role in the Capitol attack.

Jersey was friends with another Capitol riot defendant, Trevor Brown, and Jersey’s girlfriend publicly tagged the two men in a post about Jan. 6 on Facebook.

BOOM: The feds got #fingerman, who brutally assaulted officers and was IDed by #SeditionHunters. https://t.co/XaqYZp0muw

Tattoos are the unsung heroes of the Jan. 6 probe, probably followed closely by freckles and moles. pic.twitter.com/TXQ0GNLpIX

NEW: Michigan’s Justin Jersey — aka #Fingerman — was one of the Jan. 6 attackers who helped kick off the online manhunt for Capitol rioters back in January.

The FBI arrested him up today.
https://t.co/1eUmAtKm3i

Let’s meet Justin Jersey AKA #fingerman from Flint Michigan! He’s been one of the most sought after J6 suspects. pic.twitter.com/OfPIGWJqZ2