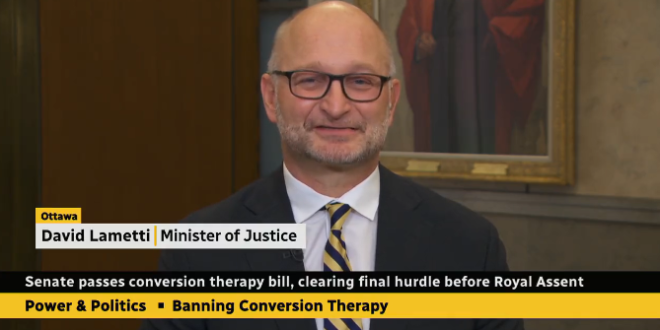 Conversion therapy will soon be banned across Canada, after the Senate agreed to the expedited passage of Bill C-4 on Tuesday.

After multiple attempts to pass legislation banning the harmful practice failed in recent years, the bill has now cleared both the House of Commons and Senate without changes, in just over a week. Once it receives royal assent, the bill will become law.

The Senate has just passed #C4 the complete ban on so-called conversion therapies. We now await Royal Assent. I want to thank all Senators. We accomplish great things when we all work together.

The Senate has passed legislation to ban conversion
therapy in Canada. Bill C-4 makes it a criminal offence to force a person to undergo practice of ‘conversion therapy’ aimed at altering their sexual orientation or gender identity. Background story: https://t.co/2zEEonWJci

“This is a fantastic day for people to be who they are and to love who they want to love.” Justice Minister David Lametti reacts to news that the Senate has passed the government’s legislation to ban conversion therapy in Canada. pic.twitter.com/p7YSEufqql

This is a big win for Canada’s LGBTQ2S+ communities. Senators have unanimously agreed to pass the conversion therapy ban. The bill now goes to Gov. Gen. Mary Simon for royal assent https://t.co/wHiFJPwPDE