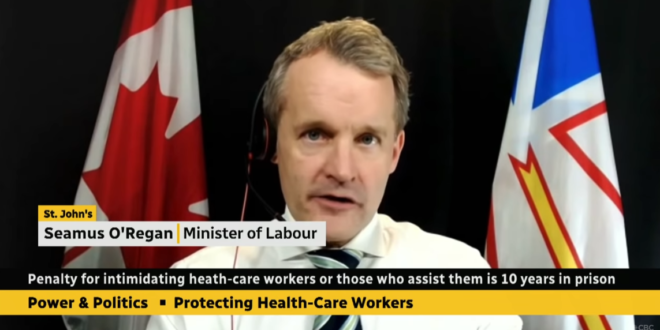 A North Bay, Ont., mother said there needs to be more protection for families at children’s COVID-19 vaccination clinics, following reported harassment this past weekend. Abby Blaszczyk attended a vaccination clinic on Nov. 28 with her son Nolan, 7, who recently became eligible for a COVID-19 shot.

On their way in and out of the appointment, Blaszczyk said they faced a torrent of verbal harassment from anti-vaccine demonstrators.

Blaszczyk said it was a disturbing experience for her mother and four-year-old daughter, who both came to support Nolan as he got his shot. “They told me I was murdering my son, I was committing genocide, stuff like that. And then, just misinformation about the vaccine itself,” she said.

From the editorial board of the Toronto Star:

It’s hard to believe that hard-core anti-vaxxers could fall any lower than besieging hospitals and harassing health-care workers. But some of them have indeed found an even uglier tactic in their campaign to scare people away from getting vaccinated against COVID-19.

We need as many kids as possible to get vaccinated as quickly as possible, and clinics offering shots should be welcoming spaces for them and their parents. Intimidating children in the name of pushing an anti-vax agenda is both infuriating and contemptible.

Police are now investigating the North Bay incident, and they should redouble their efforts to prevent this kind of activity. Vaccine clinics, along with other institutions, such as hospitals and schools, should be off-limits for such protests.

The new legislation, Bill C-3, if passed would amend the Criminal Code of Canada to include new offences in instances where people intimidate health-care workers, impede access to medical facilities, or intimidate people accessing health services such as COVID-19 vaccinations or abortion procedures.

The changes are intended to make it illegal for anyone to deliberately make a health-care worker so afraid that they cannot do their job, or to intimidate someone from seeking medical help, with a maximum penalty of 10 years in prison.