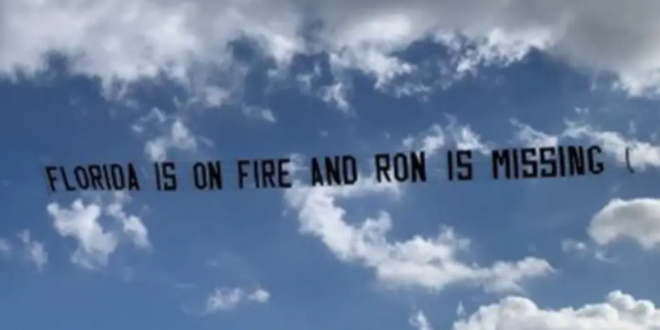 A campaign group seeking to unseat Florida governor Ron DeSantis has joined in the row over his recent absence from public view by flying a plane with a mocking banner over his state.

Launched by Remove Ron, which is led by an activist who has stalked Florida beaches during the pandemic dressed as the grim reaper, the plane’s banner reads “Florida is on fire and Ron is missing” – a reference to the governor’s near-disappearance in recent weeks.

DeSantis’s last press briefing was December 17th, and holiday images shared on his Twitter page are photos taken earlier in the month, fueling speculation that the Florida governor might be on vacation while Covid cases rage in his home state.

“Florida is on fire and Ron is missing” reads the message on this airplane flying all over Miami and South Beach via @RemoveRon.

Ron DeSantis trolled by plane with banner accusing him of being AWOL ⁦@RemoveRon⁩ https://t.co/Mu6Jgt2xab