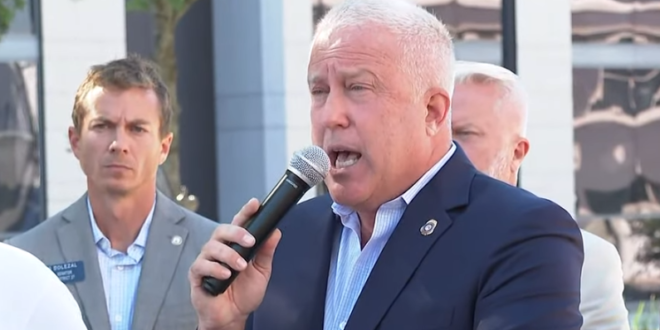 The Atlanta Public Schools Board of Education tonight will consider formalizing its opposition to the push to create Buckhead City. State Sen. Brandon Beach of Alpharetta prefiled legislation to incorporate Buckhead, Atlanta’s whitest and wealthiest part of town.

Proponents say they want more control over crime and how their tax dollars are spent. APS stands to lose about $232 million from its annual budget, according to a study commissioned by the Buckhead Coalition, a community group that opposes cityhood.

Bill White, chair of the Buckhead City Committee, says while APS is allowed to expand its boundaries to match any new annexation incorporated into Atlanta, that policy doesn’t address what happens with those boundaries shrink.

Bill White recently appeared on JMG when he launched a super PAC to unseat the ten Republican House reps who voted to impeach Trump.

You may recall the 2018 New York Times report on how White and his husband abandoned a lifetime of liberal advocacy to join the cult.

Atlanta’s school board set to vote on 2022 legislative priorities, including opposing deannexation of #Buckhead to create its own city https://t.co/6RIrmGQuxK @KristalDixon @axios #Atlanta #education

Anthony Fauci and Chinese CDC Director’s Email Exchanges Exposed: ‘We Will Get Through This Together’ https://t.co/e4EMGd6LTr

Why a Judge Has Georgia Vote Fraud on His Mind: ‘Pristine’ Biden Ballots That Looked Xeroxed https://t.co/YxfPPpR5vh