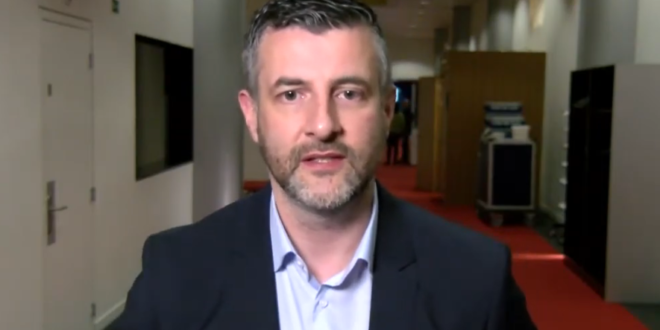 A Belgium politician has said anti-vaxxers threw a Molotov cocktail at his home after he said vaccinations were the way out of the coronavirus crisis. Pascal Arimont, an MEP for the Christian Social Party, used a Facebook post to condemn the attack outside his house.

The fire bomb was thrown at his home in Büllingen on Saturday, said the MEP, who has made a complaint to police. The attackers also used spray paint to write a threat across his garage door.

When translated, it read: “Lying, blackmailing, inciting hatred, dividing… you will pay for it”. The MEP said he had found the Molotov cocktail 1m under the windows of the bedrooms where his children sleep.

“Those responsible must be brought to justice,” Sassoli said in a tweet on Monday (6 December). “We will never tolerate this kind of hatred. In a democracy, disagreement must be solved with words, not violence,” he said.

His comments follow an attack over the weekend against the family home of Belgian centre-right MEP Pascal Arimont. Vandals tossed a Molotov cocktail at his house, confirmed by the police. Although it did not set fire to the house, the incident left Arimont badly shaken.

The whole @Europarl_EN stands in solidarity with MEP @pascal_arimont after the cowardly attack on his family home.

We will never tolerate this kind of hatred. In a democracy, disagreement must be solved with words, not violence. Those responsible must be brought to justice.

I would like to express my sincere thanks for the overwhelming wave of expressions of support that have been sent to me and my family the last days. (1/4)

I would like to thank @EP_President, who has expressed his support on behalf of the entire @Europarl_EN, for the letter of solidarity of my @EP_Regional colleagues, my group leader @ManfredWeber and my many colleagues from a wide range of political groups. (2/4)

I would also like to thank the many people from outside the political sphere who stand by me and my family and have expressed their solidarity in many messages. (3/4)

All these statements of support give me and my family a great deal of courage and confidence. I would like to thank everyone for this! Hatred and violence must and will never be the solution! (4/4)

Previous China: US Will “Pay A Price” For Olympics Boycott
Next New German Chancellor Vows To “React Decisively” Against Violent Demonstrations By Anti-Vax Activists