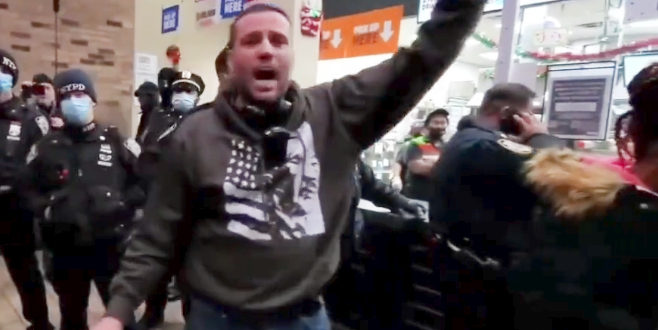 Yet another pointless demonstration in NYC last night:

The Burger King at Fulton and Adams Streets in Brooklyn, near Borough Hall, in Downtown Brooklyn was the site of an anti-mandate rally Monday, whereupon protesters gathered to protest the city’s vaccine mandate on Monday evening. After protests outside Brooklyn’s Borough Hall, the current office of Mayor-Elect Eric Adams, protestors were arrested for trespassing after refusing to show their vaccine cards at a local Burger King.

I recognize the guy in the straw hat as being part of the group that was denied service over the weekend at the restaurant in Trump Tower.

Anti-vaxxers in NYC get arrested after they storm a Burger King and refuse to leave pic.twitter.com/xKStisxESx

#BREAKING multiple protesters against mandates were just arrested at Burger King in Brooklyn for defying the mandates. The NYPD Responded and told them if they don’t leave they will be charged with trespassing. They were taken out in cuff #VaccinePassports #VaccineMandate #NYC pic.twitter.com/ltNZMP8ZN4

Special thanks to @patriottakes for posting a video of an anti-vax demonstration that recently took place at an NYC Burger King.

The guy at the center of it looked familiar from the Capitol on Jan6, and after a bit of clip sifting, here he is—#IAmMitchellBosch on the west side: pic.twitter.com/mkNlVZuDJ7

NYC antivaxxers, some wearing MLK images, storm a Burger King to protest vaccine mandates and begin cussing at each other. Many scatter when the NYPD show up. pic.twitter.com/5pJGLQGfnA

“Ain’t nothing more beautiful than being behind bars.”

January 6th rioter Mitchell Bosch commits to being arrested for trespassing at a Burger King despite being given “ample time” to leave.

The antivaxxers ask NYPD will leave before they do and refuse to leave together. pic.twitter.com/AgJUow3hgX

January 6th rioter Mitchell Bosch tells other antivaxxers to “lock arms” in the Burger King lobby and calls any other antivaxxer leaving at this point in order to avoid arrest, “a coward.” pic.twitter.com/UCaClFiQCf

It appears that Burger King isn’t the only place Mitchell Bosch likes to storm, this anti-vaxxer is a January 6th insurrectionist https://t.co/ICOPdiiLKV

The cops attempted to corral the crowd out. Mitchell Bosch said anyone who leaves is cowards. Multiple arrests now. TARU getting lots of great footage. pic.twitter.com/f38AoTRlMN

Overheard in the Burger King:
“Who’s in charge here? Be a hero!”
“They have the police lawyer here!”

Mitchell Bosch, antivaxxer who’s already been arrested at least twice, is screaming and throwing his water bottle on the ground.

Previous Ron Johnson: Since The Vaccinated Can Get COVID, “What’s The Point” Of Even Having Vaccines? [VIDEO]
Next Fourth College Bowl Game Canceled Due To COVID