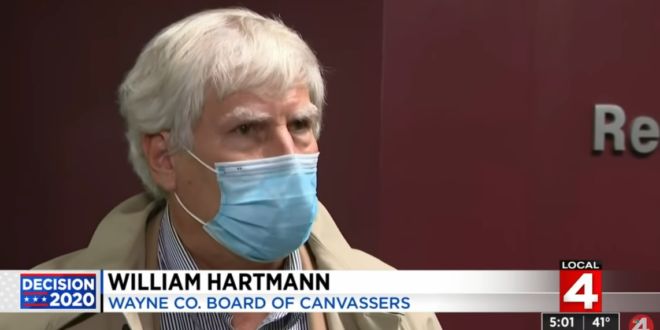 William Hartmann, the Republican member of the Wayne County Board of Canvassers who made national headlines for initially refusing to certify the results of the 2020 presidential election, died Tuesday following a battle with COVID-19. Douglas Reimel, Hartmann’s friend, shared the news on Facebook, and others who knew Hartmann offered their condolences online. Hartmann was 63.

Hartmann’s fight with COVID-19 landed him in the ICU, where he was on a ventilator, according to Elizabeth Hartmann, his sister. He was hospitalized at Wyandotte Hospital, according to Reimel. Hartmann was an avid supporter of Trump and garnered national attention when he joined Monica Palmer, the former Republican chair of the Wayne County Board of Canvassers, in voting against certifying the county’s votes in the 2020 presidential election.

William Hartmann, the GOP Wayne Co Bd of Canvassers Rep who compared mandates to Nazi Germany, said “if the ouchie is so great why do they have to offer bribes,” and refused to certify the 2020 election, will not be voting in the next one. https://t.co/sh4BIauv1Q