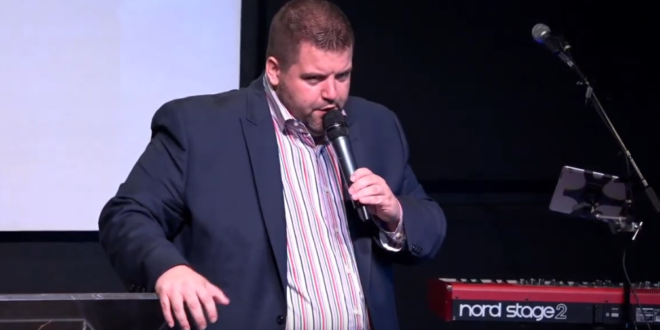 First, reminder from five months ago:

In his sermon, Joshua Feuerstein told the biblical story of King Ahab and Jezebel and how they faced off against the prophet Elijah. He described Ahab as a senile old man and Jezebel as someone who “slept her way to the top.” “Does that sound familiar?” he said, leading to raucous cheers from worshipers. “You have a sound mind!” Feuerstein declared. “You don’t have to wear a mask! You got Jesus. You don’t need the vaccine! You got Jesus.”

And below, the seemingly inevitable.

When he says Joshua Feuerstein couldn’t preach yesterday “because he might have got the thing,” does he mean “the thing” about which Feuerstein declared “you don’t need the vaccine, you got Jesus”? https://t.co/smBJX8nBNO pic.twitter.com/cRmqUBymgH

RELATED: Feuerstein appeared on JMG in 2017 when a Florida man lost his lawsuit against an Orlando bakery that refused to make a cake with the message, “Homosexuality is an abomination unto the Lord.” After Feuerstein posted a video about the case, the bakery got hundreds of harassing phone calls, including death threats.  Feuerstein made separate national headlines in 2015 for his campaign against Starbucks for their “anti-Christian” holiday cup.