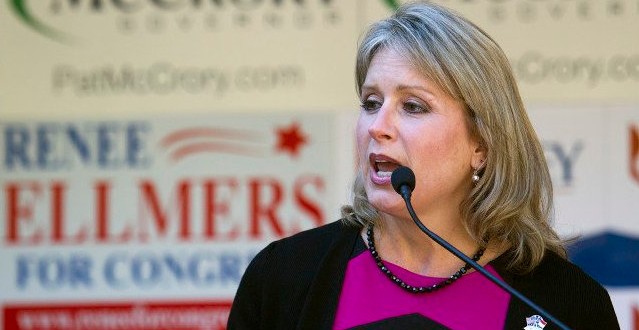 Ellmers, you’ll recall, lost her primary in 2016 following allegations that she was having an extramarital affair with Kevin McCarthy, who also lost his bid for speaker around that time in part due to the controversy.

Yet the plot thickens: McCarthy met Wednesday with Bo Hines, a former football player and Trump loyalist who is currently running in another North Carolina district — but who is considering switching to run against Ellmers instead.

Ellmers last appeared on JMG on the day of her 2016 defeat when she was caught on video ridiculing a woman for being overweight.

Ellmers is a loud opponent of LGBT rights and in 2014 she easily defeated political newbie Clay Aiken after attacking his alleged “San Francisco values.”

For the past 18 months I’ve been on t he frontlines fighting COVID. Now I am honored to be officially running for Congress to fight for the good people of NC’s 4th district where I live & work. I will file this Friday. #MakeAmericaGreat #Trump