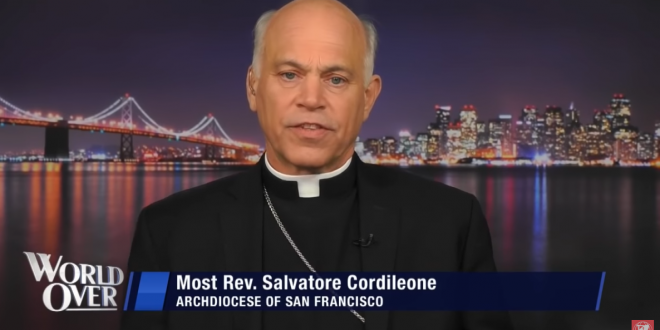 San Francisco Archbishop Salvatore Cordileone has revealed he is not vaccinated against the coronavirus and suggested — incorrectly — that the inoculations the federal government approved to prevent COVID-19 “are not really vaccines.”

“We think of a vaccine as a shot that gives you immunity to a disease for life or at least for a very long time. And these actually don’t give any immunity at all. They give protection,” Cordileone said.

Cordileone, an archconservative prelate who is no stranger to controversy for his outspokenness on culture war issues like abortion and same-sex marriage, also told the newspaper that his “immune system is strong,” and that his personal physician had told him “it’s probably not necessary for me to be vaccinated.”

Pope Francis has strongly urged Catholics to get vaccinated and has condemned anti-vax activism.

The last US archbishop who made news for being anti-vax ended up spending weeks on a ventilator.

Cordileone, who was recently in the news leading the push to deny Biden communion, is considered to be the “father” to California’s Proposition 8, which successfully repealed the legalization of same-sex marriage.

In September, he called pro-choice members of the US House “satanists.” In March, Cordileone signed a statement from the US Conference of Catholic Bishops which lobbied the federal government against a funding for a suicide hotline for LGBTQ youth.

Last October, Cordileone performed an exorcism at the California site of a civil rights protest.