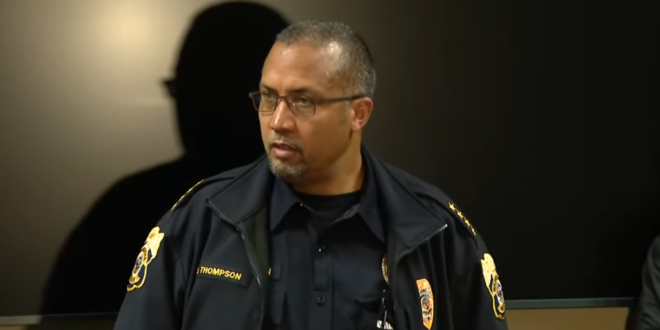 Darrell Brooks, 39, was charged with five counts of murder after he allegedly plowed through a Christmas parade in Waukesha, Wisconsin, on Sunday, killing at least five and injuring dozens more.

Brooks, who has a lengthy criminal record, was taken into custody near the scene after a Waukesha police officer opened fire to try to stop the vehicle, authorities said. Officially, Brooks was charged with five counts of intentional homicide, which is the legal equivalent of first-degree murder in Wisconsin, and carries a life sentence upon conviction.

In the moments before the incident, police received a call of a domestic disturbance, possibly involving Brooks. Police Chief Dan Thompson [photo] said police didn’t even have time to respond to that call and fully investigate before Brooks allegedly drove onto the parade route. He said this was not an act of terrorism.

The victims were women aged 79, 71, 52 and 52, and a man, 81, was also killed. Thompson said 48 people were injured, including two children in critical condition.

The suspect, who has a significant criminal history, was questioned overnight, with investigators probing the possibility that the driver had been fleeing an earlier incident involving a knife fight.

On Monday, the Milwaukee County District Attorney’s office released a summary of pending charges against Brooks, which include charges of second-degree recklessly endangering safety and felon in possession of a firearm from July 2020.

A 39-year-old Milwaukee man with an open court case related to domestic violence has been taken into custody, according to a law enforcement source with firsthand knowledge of the situation. https://t.co/IFub21C89t

Previous US Listed As “Backsliding Democracy” For First Time
Next QAnon Nuts Return To Dallas To Await JFK Jr. [VIDEO]