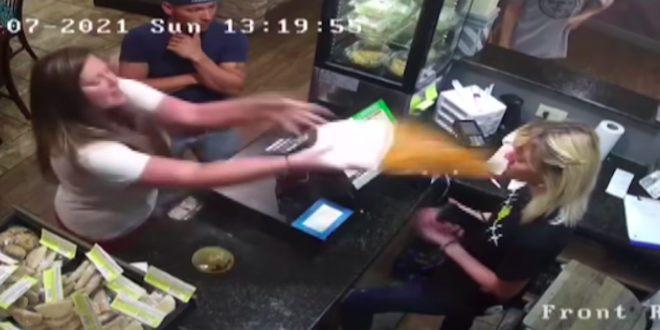 This blew up on social media ten days ago and it’s not clear why it took so long for the arrest to take place.

A Texas woman was arrested Wednesday after she was allegedly caught on camera throwing a profanity-laden tirade in a restaurant that ended with her throwing a cup of soup in the face of one of the employees.

Amanda Nicole Martinez, 31, of Temple, was taken into custody and charged with one count of assault causing bodily injury.

The video, which quickly went viral on social media, shows the incident that unfolded on Nov. 7 at 1:30 p.m. at the Sol De Jalisco located in Waco.

Police said Martinez called Sol De Jalisco on Nov. 7 to complain about her order. After the call, she showed up at the restaurant. She said her soup was so hot that it melted the plastic lid on top. Police said she then threw the soup at an employee.

The victim, Nelly, said she apologized and tried to offer her a refund or another meal. “She did not want to hear it at all,” said Nelly. “All she wanted to do was yell and cuss.” She said the Martinez threw the hot menudo in her face after Nelly threatened to call police.

#BREAKING – Police arrested Amanda Nicole Martinez, 31, the woman accused of throwing soup in the face of a restaurant employee during a disturbance on November 7 at Sol De Jalisco. pic.twitter.com/TA3h2xrmHI

Previous White House Unveils Turkeys To Be Pardoned By Biden
Next US Indicts Two Iranian Hackers Who Posed As Proud Boys And Threatened Dems: Vote For Trump Or Else