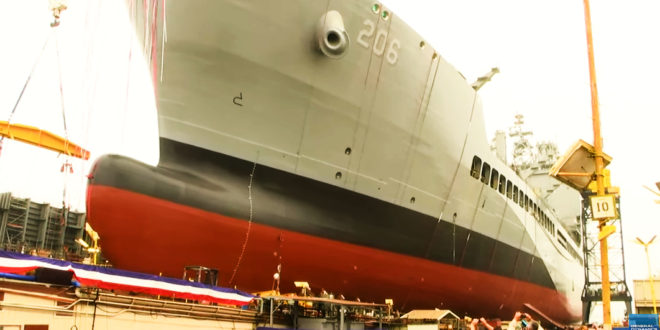 The Navy christened its latest ship Saturday, a replenishment oiler named after slain civil rights leader Harvey Milk, during a ceremony in San Diego. The USNS Harvey Milk is the second ship in the Navy’s John Lewis class of fleet replenishment oilers, which will serve to refuel Navy ships at sea.

The John Lewis-class of ships are each planned to be named after notable civil rights leaders and activists. Milk served in the Navy during the Korean War as a diving officer, then became the first openly gay elected official in California when he was elected to the San Francisco Board of Supervisors in 1977.

The Navy christened and launched a ship named for slain gay rights leader Harvey Milk, who served 4 years in the Navy during the Korean War.https://t.co/qZFgBweyMg

#TeamToni was happy to attend @GDNASSCO‘s christening and launch ceremony for the @USNavy‘s Harvey Milk ship! This vessel was built by San Diegans to commemorate Harvey’s profound civil rights legacy and honor his service in the Navy. 🏳️‍🌈🛳 pic.twitter.com/OhCwpDemIj

The USNS Harvey Milk was launched in San Diego. The US Navy Fleet Oiler was commissioned by Paula Neira, the Clinical Program Director for John Hopkins Center for Transgender Health. SF Supervisor Milk was killed in office by Dan White in 1978. Milk was a Navy Vet. @nbcbayarea pic.twitter.com/P1aPq9CWF2

Harvey Milk may have been booted from the U.S. Navy for being gay, but the slain civil rights leader and S.F. icon will live on in the branch of the military for decades — as a supply ship.https://t.co/AgIWNDiYCW

The replenishment oiler USNS Harvey Milk was christened and launched in San Diego Bay on Saturday.https://t.co/yd0TVX9V9a