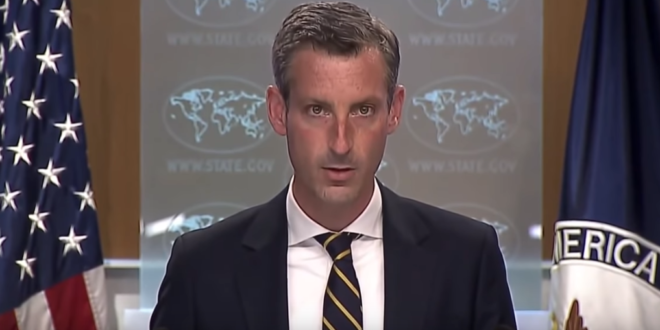 The United States on Monday confirmed that a Russian anti-satellite missile test was responsible for causing a debris field in space that forced astronauts aboard the International Space Station to temporarily seek shelter.

State Department spokesperson Ned Price [photo] told reporters that Russia had “recklessly conducted a destructive satellite test of a direct ascent anti-satellite missile against one of its own satellites.”

The Russian test, Price said, “has so far generated over 1,500 pieces of trackable, orbital debris and hundreds of thousands of pieces of smaller orbital debris that now threaten the interests of all nations.”

Read the full article. Earlier today crew members aboard the International Space Station briefly took shelter inside the Dragon and Soyuz lifeboats as the station passed through the debris field.

‘Irresponsible act’: US raps Russia after missile strike on its own satellite – #EU #EUrope https://t.co/nTUPfb5QQq

Russia tested an anti-satellite missile today that created a large cloud of debris that could threaten other satellites and even people in orbit, the U.S. said. https://t.co/PrD1NKMFYk

The US State Department has confirmed that Russia conducted an anti-satellite test this morning, destroying one of its own satellites. The US has identified at least 1,500 trackable pieces of debris from the event. https://t.co/5Ba4MwtEo3 pic.twitter.com/ix0ps5yqHA