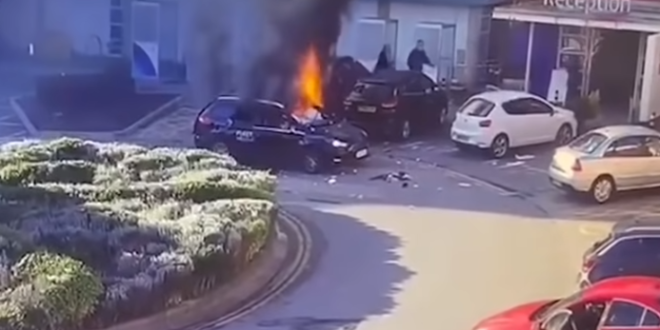 A possible terrorist attack may have been averted on Sunday by a heroic taxi driver in the northern England city of Liverpool. Video shows the moment a taxi pulled up to a hospital in the British city and exploded in a ball of flames. It emerged on Monday that the driver’s quick actions may have prevented a more serious tragedy.

CBS News correspondent Holly Williams reports that British Prime Minister Boris Johnson praised the taxi driver on Monday for bravery and presence of mind, and the Mayor of Liverpool said the driver had heroically averted what could have been an “awful disaster,” after apparently noticing his passenger’s suspicious behavior and locking the man in his car.

Officers said Monday that a passenger is believed to have entered the vehicle with an explosive device that suddenly went off. The suspect died in the blast but the taxi driver managed to escape. Police have arrested four men, all aged in their 20s, and believe they know the identity of the suspect.

The incident began when the driver of the taxi picked up a fare on a residential street in the northwest English city. A man entered and asked to be taken to Liverpool Women’s Hospital, a short drive away, Assistant Chief Constable Russ Jackson of Counter Terrorism North West said at a press conference on Monday.

About two hours after the blast, properties on Rutland Avenue near Sefton Park and in the Kensington area were raided by armed officers. Three arrests took place in Sutcliffe Street, in Kensington, where witnesses reported seeing armed officers approach a terraced house.

The second around Sutcliffe Street and the adjacent Boaler Street – about a mile from the hospital – took place an hour later, at about 14:00. There was a heavy police presence, including police negotiators, outside the house on Rutland Avenue overnight.

The taxi driver, identified by local news media as David Perry, picked up a man who asked to be taken to the Liverpool Women’s Hospital. As the taxi approached the drop-off point at the hospital, an explosion went off inside the vehicle and engulfed it in flames. Remarkably, the driver escaped with minor injuries.

Security camera footage taken at the scene shows the moment the taxi pulled up at the hospital entrance, before a blast appears to blow the windows out of the vehicle. White smoke can be seen rising from the car as the driver leaps out of the front seat.

A mile away from the blast site, thousands of veterans, military staff and local leaders were holding a Remembrance Day ceremony in Liverpool Cathedral at the time of the explosion. It is still unclear whether the incident was linked to the event, a commemoration of Britain’s war dead.