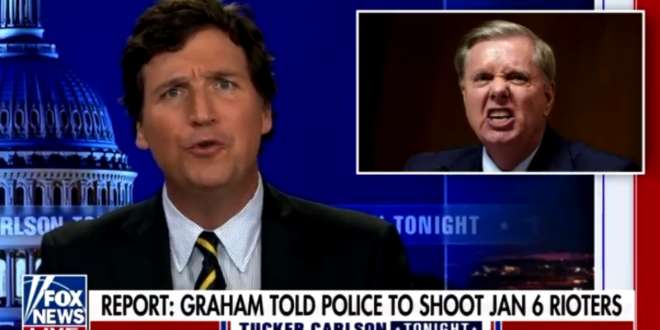 Tucker Carlson: Lindsey Graham Wanted Capitol Police To “Murder” The Rioters For The “Crime Of Trespassing”

“What we just learned from this very long Washington Post rebuttal to our documentary series is that on January 6, Lindsey Graham was running around the Capitol ordering the Capitol police to murder the protestors.

“Shoot American citizens for the crime of trespassing? Really? This is the conservative position? Unarmed protestors show up, look, they shouldn’t have been there. We’ve never defended that and never would.

“But kill them? What the hell’s wrong with you, Lindsey Graham? How long before you’re ordering drone attacks on people whose politics you don’t like? What a revealing moment this is.” – Tucker Carlson, on last night’s show.

Fact check: The Washington Post piece was in the works for weeks before anybody had heard about Carlson’s “Patriot Purge” series.

Tucker: What the hell is wrong with you Lindsey Graham? pic.twitter.com/4oSxydlKxJ

Previous Georgia Sec Of State: Trump’s Call To Me Was A Threat
Next Burger Chain Closes Indoor Dining In California County Rather Than Comply With Vax Proof Mandate [VIDEO]