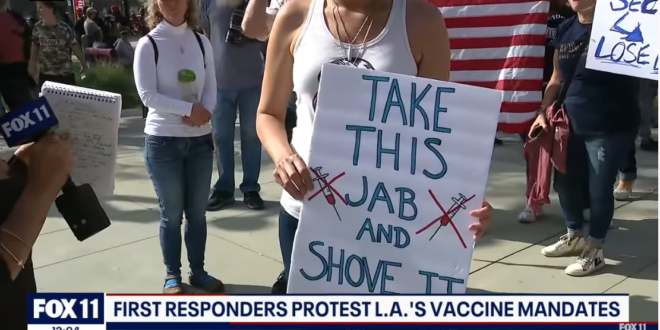 Thousands gather outside Los Angeles City Hall Monday to protest the mandate for all city workers to get vaccinated against COVID-19 by Dec. 18. The vaccine requirements for city workers are meant to increase vaccination rates and stave off another deadly COVID-19 surge as the virus continues to circulate and the more-transmissible delta variant spreads.

The group Firefighters 4 Freedom organized the rally, dubbed “A March for Freedom,” saying it will be attended by firefighters, police officers, sanitation workers and city government employees. Aerial video showed a large crowd of people, many carrying “thin blue line” and “thin red line” flags, and signs including ones saying “stop the mandate.”

The woman seen above claimed to the reporter that everybody in the hospital has been vaccinated. Yeah.