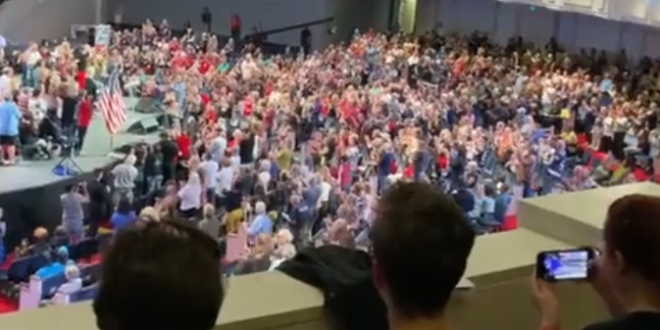 A crowd at a church in Texas hosting a QAnon-linked event erupted in a “let’s go Brandon” chant that had been encouraged from the stage.

Another clip shows that the “let’s go Brandon” chant—which Donald Trump supporters use as a direct replacement for the “f**k Joe Biden” chant—did not erupt spontaneously, but instead was led by those on stage.

Earlier this year John Hagee was hospitalized for COVID after having preached that “Jesus is the vaccine.” He has since been vaccinated.

In 2005 Hagee called Hurricane Katrina “the judgment of God” over New Orleans’ Southern Decadence festival. He recently appeared on JMG when he declared that “atheists killed Jesus.”

Hagee has said Sodom and Gomorrah was only a “pilot study” for killing homosexuals. He has also said that God sent Hitler to enable the creation of Israel.

The Q-Anon crowd is at televangelist John Hagee’s Cornerstone Church in San Antonio.

They are chanting, “Let’s Go Brandon” from the church pews. pic.twitter.com/pGqUmUXezn

Here’s another angle. This wasn’t a spontaneous crowd chant. This was led from the stage. pic.twitter.com/tWh9vvasau