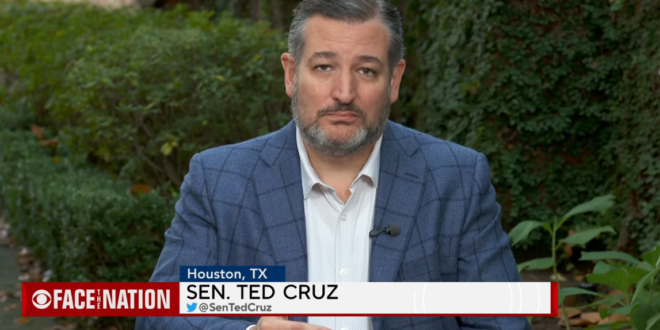 Face the Nation host Margaret Brennan took Sen. Ted Cruz (R-TX) to task over his support of the Big Lie in a tense interview on CBS.

During a contentious exchange on the Sunday morning program, Brennan confronted Cruz over revelations from the recent Bob Woodward and Robert Costa book “Peril” detailed in conversations Cruz had with former President Donald Trump.

According to the book, Cruz knew full well that Congress did not have the power to overturn the 2020 election and he made that known to Trump ahead of the Jan. 6 Capitol riot — despite challenging the certification of the vote in the Senate that day.

Read the full article. As you’ll see in the clip, Cruz became increasingly combative as he continued to back Trump’s lies and claim that he has “no idea” what the book says.

CBS’ Margaret Brennan Grills Ted Cruz Over the Big Lie in Tense Interview: There’s ‘No Evidence of Fraud’ Senator, ‘You Know That’ https://t.co/tm44pocgR3

Sorry, but if you’re going to platform an election denier & insurrection inciter like Ted Cruz – & personally I wouldn’t – you need to press him, & push back, on his dangerous lies much, much harder than this. Have we in the media learned nothing from 4 years of Trump plus 1/6?? https://t.co/7rCNHVnwu9