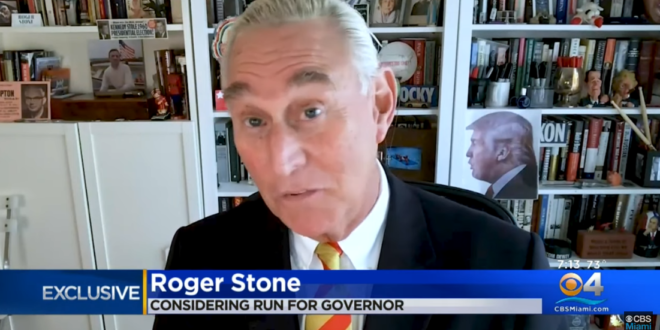 Stone Threatens To Challenge DeSantis If He Doesn’t Promise Not To Run For President: I’ll Siphon Off Votes

Roger Stone, a longtime ally of former President Donald Trump, said he will run for governor of Florida just to siphon votes away from Gov. Ron DeSantis – unless DeSantis commits to not running for president in 2024.

“I believe that Gov. DeSantis, assuming he’s going to run for re-election, should pledge to the people of Florida that he will fill out all four years of a second term,” Stone told CBS Miami on Friday.

“What I don’t want to see is for him to be reelected and then immediately abandon Florida to run off and run for president, particularly if he’s running against Donald Trump.”

Read the full article. Last week Stone threatened to run against DeSantis if he doesn’t order a full audit of the 2020 election.