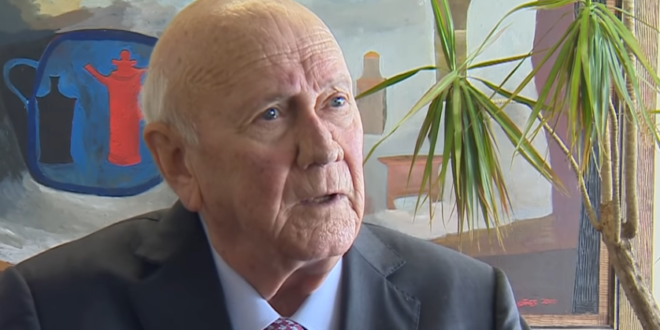 FW de Klerk, the former president of South Africa and the last white person to lead the country, has died at the age of 85. Mr de Klerk, who was also a key figure in the nation’s transition to democracy, had been diagnosed with cancer this year, a spokesman said.

He was head of state between September 1989 and May 1994. In 1990 he announced he was releasing anti-apartheid leader Nelson Mandela, leading to multi-party polls in 1994.

Mr de Klerk shared the Nobel Peace Prize with Mr Mandela for helping to negotiate an end to apartheid. But his legacy has divided opinion in South Africa.

With its web of insidious laws doling out rights, privileges and even meal sizes in prisons based on skin color, apartheid was not easy to undo, requiring years of legislative action and significant national angst. But when Mr. de Klerk in 1990 announced the lifting of the 30-year ban on the African National Congress and the release from prison of its most prominent leader, Mr. Mandela, he set in motion a transformation so powerful that it quickly pushed him to the margins.

Mr. de Klerk’s efforts to remake the National Party that his grandfather helped create from a white-dominated organization into a multiracial one with the clout of the A.N.C. fizzled. Frustrated by internal party tensions and criticism from the country’s Truth and Reconciliation Commission, which investigated the country’s past, Mr. de Klerk announced his retirement from politics in 1997.

Later in life, after South Africa’s wrenching political transition, de Klerk said there was no longer any animosity between him and Mandela and that they were friends, having visited each other’s homes. De Klerk did not seem to fit easily into the role of a Nobel laureate. He remained a target of anger for some white South Africans who saw his actions as a betrayal. Though he publicly apologized for the pain and humiliation that apartheid caused, he was never cheered and embraced as an icon, as Mandela was.

“Sometimes, Mr. de Klerk does not get the credit that he deserves,” Nobel laureate and former archbishop Desmond Tutu told David Frost in an interview in 2012. Despite his role in South Africa’s transformation, de Klerk would continue to defend what his National Party decades ago had declared as the goal of apartheid, the separate development of white and Black South Africans.