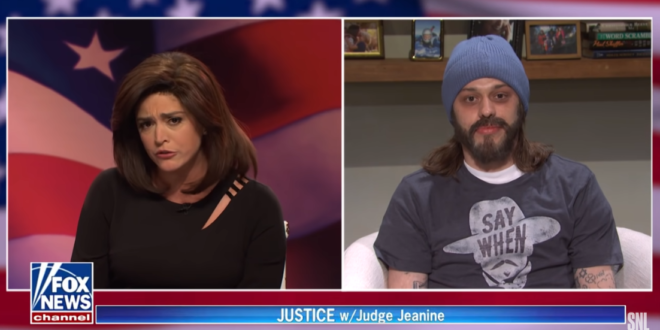 Played by Pete Davidson, this fictional version of Rodgers appeared on “Justice with Jeanine Pirro,” with Cecily Strong of course reprising her beloved role as Pirro. He joined her remotely to discuss how the “woke mob” is now coming after him.

“It’s my body and my COVID. I can give it to whoever I want,” he tried to argue. He also said he never lied about his status, noting that he took all of his teammates into a huddle, “got their faces three inches from my wet mouth and told them, ‘Trust me, I’m more or less immunized. Go team.’”

Read the full article. As you’ll see, the bit goes on to tackle Glenn Youngkin and right wing parents over their “outrage” about so-called critical race theory.