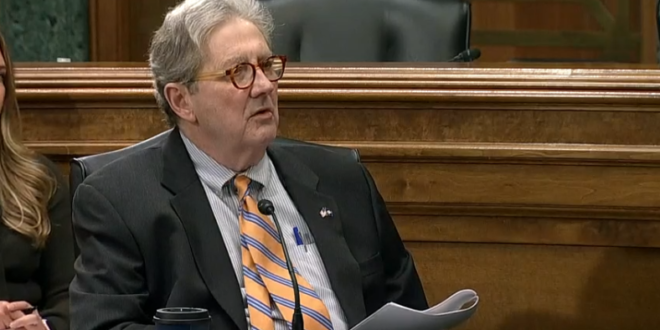 Saule Omarova, nominated to serve as Comptroller of the Currency, faces a difficult path to confirmation. The Cornell University law professor and Wall Street critic is confronting probable unanimous opposition from Senate Republicans and has drawn skepticism from some moderate Democrats for recent policy positions she has staked out, including in papers exploring structural reforms to the banking system.

But her confirmation hearing erupted into partisan sniping Thursday over her biography, after Sen. John Neely Kennedy (R-La.) suggested Omarova may harbor loyalties to the Communist ideology of the regime that brutalized her family. “I don’t know whether to call you ‘professor’ or ‘comrade,’” Kennedy told Omarova, after pressing her to produce a letter of resignation from a Soviet youth group to which she was required to belong when she was a girl.

He also accused Omarova of joining “a Marxist Facebook group.” She said she had never knowingly joined such a group or had such discussions on social media. “Senator, I am not a communist. I do not subscribe to that ideology. I could not choose where I was born,” Omarova replied to Kennedy.

She said her family suffered under the communist regime, adding that history is “ingrained in her mind.” Omarova became an American citizen in 2005. “I’m proud to be an American. I am here today because I am ready to serve in public service,” Omarova said.

Democratic Sen. Elizabeth Warren ripped into Sen. John Kennedy on Thursday after the Louisiana Republican suggested that President Joe Biden’s nominee for comptroller of the currency, Saule Omarova, is a communist.

Kennedy asked Omarova about her membership in a youth communist group when she was growing up in Kazakhstan. She responded by emphasizing that membership was compulsory and a normal aspect of growing up in that part of the world at the time.

“Sexism, racism, pages straight out of Joe McCarthy’s 1950s Red Scare tactics … Welcome to Washington in 2021,” the Massachussetts senator said, referencing an era during the Cold War when Sen. Joe McCarthy fomented paranoia about communism infiltrating the US.

Sen. John Kennedy (R-LA) presses Biden’s pick for currency comptroller Saule Omarova about “you used to be a member of a group called The Young Communists.”

Omarova explains, because she was born in the Soviet Union, she was part of school youth programs mandated for students. pic.twitter.com/mYSkOounx3

Sen. John Kennedy (R-LA): “I don’t know whether to call you professor or comrade.”

Someone off-camera: “Oh my goodness.”

Dr. Saule Omarova, Biden’s comptroller currency pick: “I’m not a communist. I do not subscribe to that ideology. I could not choose where I was born.” pic.twitter.com/CEiCWNwx2N