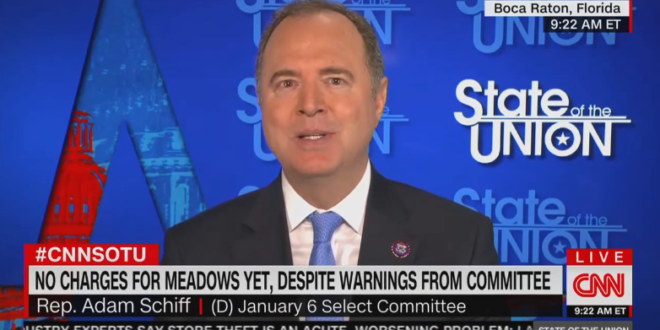 Schiff: Meadows Contempt Charge May Be This Week

The House select committee investigating the Jan. 6 riot will decide this week whether to hold former White House Chief of Staff Mark Meadows in contempt for failing to appear before the panel, Rep. Adam Schiff told CNN’s “State of the Union” on Sunday.

Meadows is not the first witness to defy a subpoena to appear for a deposition before the select committee. Earlier this month, former Trump adviser Steven Bannon was taken into custody on contempt of Congress charges after defying his own subpoena from the panel.

Previous Rally Organizer To Comply With Subpoena: I’m Broke
Next Fauci Roasts Ted Cruz’s Call For Him To Be Prosecuted: “What Happened On January 6th, Senator?” [VIDEO]