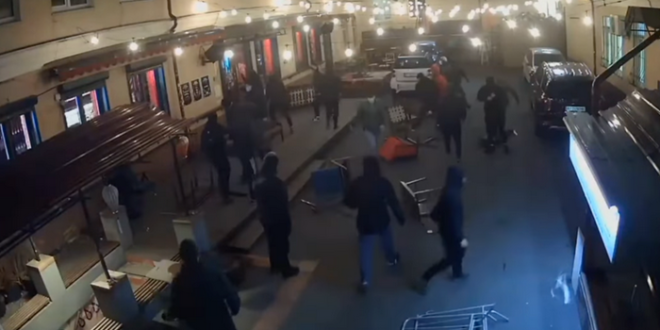 A Kiev bar, frequented by members of LGBT community, has been attacked by a group of masked assailants, believed to be neo-Nazis, who smashed the establishment’s windows and destroyed outdoor seating. The HvLv bar, located in the central part of Ukraine’s capital, was targeted late on Friday. The venue was set upon by around 20 masked men, some of whom were armed with telescopic batons and pepper spray.

Surveillance footage from the scene circulating online shows the assailants skirmishing with two bouncers, with both parties dousing each other with pepper spray. Heavily outnumbered, the security staff retreated into the bar, leaving the outdoor seating area at the mercy of the attackers. During the attack, the masked men shouted homophobic and neo-Nazi slogans, the business claimed in an Instagram post, specifically “Death to the f**gots,” “Let’s get the f**gots,” and “White power.”

Twelve men have allegedly been arrested on charges of “hooliganism.” It’s worth noting that Russia may have ulterior motives in reporting this incident due to escalating tensions with Ukraine. Video below is from the outlet’s official YouTube channel.