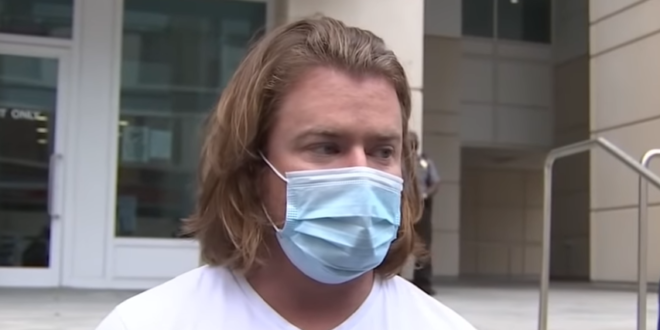 The Parrish man who posed for photos after stealing Nancy Pelosi’s lectern during the Jan. 6 Capitol riot has pleaded guilty to illegally entering the Capitol that day.

Adam Johnson, 36, was quickly identified after photos of him smiling and waving while carrying the lectern went viral, and other Manatee County residents recognized him and submitted tips to the FBI. Johnson could face up to one year in prison, a $100,000 fine, a year of supervised release and could be forced to pay whatever restitution is left to be paid after payments from others convicted in the case.

Senior U.S. District Judge Reggie B. Walton will sentence Johnson at 9:30 a.m. Feb. 25. Walton called Johnson weak-minded enough to believe Trump’s lie and do what he did before asking him, “So why shouldn’t I lock you up sir? Why should I think that you won’t do this again?”

Read the full article. Johnson may not get any jail time. Note that he attended his hearing in a t-shirt, shorts, and flip-flops while wearing an ankle monitor.

NEW: Judge scolds Florida man who took Pelosi lectern in Capitol riot. ‘Why shouldn’t I lock you up?’ https://t.co/25POSFWNaq

Adam Johnson, 36, pleaded guilty in federal court Monday to entering and remaining in a restricted building or grounds, a charge that comes with a maximum sentence of one year in prison and a fine of $100,000. https://t.co/DWO4p4tiTl